The Art of Rivers by Janet W. Ferguson: Book Tour with Review 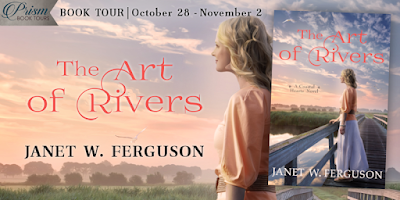 On Tour with Prism Book Tours

The Art of Rivers (Coastal Hearts #3) By Janet W. Ferguson Christian Contemporary Romance Paperback & ebook, 299 Pages June 30th 2019 by Southern Sun Press LLC
​Rivers Sullivan bears both visible and invisible scars—those on her shoulder from a bullet wound and those on her heart from the loss of her fiancé during the same brutal attack. Not even her background as an art therapist can help her regain her faith in humanity. Still, she scrapes together the courage to travel to St. Simons Island to see the beach cottage and art gallery she’s inherited from her fiancé. When she stumbles upon recovering addicts running her gallery, she’s forced to reckon with her own healing.
After the tragic drowning of his cousin, James Cooper Knight spends his days trying to make up for his past mistakes. He not only dedicates his life to addiction counseling, but guilt drives him to the water, searching for others who’ve been caught unaware of the quickly rising tides of St. Simons. When he rescues a peculiar blond woman and her sketch pad from a sandbar, then delivers this same woman to his deceased grandmother’s properties, he knows things are about to get even more complicated.
Tragic circumstances draw Cooper and Rivers closer, but they fight their growing feelings. Though Cooper’s been sober for years, Rivers can’t imagine trusting her heart to someone in recovery, and he knows a relationship with her will only rip his family further apart. Distrust and guilt are only the first roadblocks they must overcome if they take a chance on love.
(Affiliate links included.) Goodreads│Amazon│Barnes & Noble│Book Depository Also available through KindleUnlimited.

REVIEW:
4/5 Stars
I was sent this book from the publisher/publicity team. My ratings and reviews will be my own personal opinions and are in no way influenced by publishers or authors who may have sent me books to review.

Art of Rivers is the third book in the Coastal Hearts series.  I did not realize this was part of a series.  I read this as a standalone and had no problem getting to know the story.  However; I enjoyed it so much I plan to go back and read books one and two.

Triggers for substance abuse and addiction.  I loved that this focuses on series topics, but also had romance and family within the themes as well.  If you love hard hitting contemporary, I think you will really enjoy this one.  I was not expecting the story at all and I fell in love with the authors writing.

Overall, I loved this one.
Other Books in the Series

Janet W. Ferguson grew up in Mississippi and received a degree in Banking and Finance from the University of Mississippi. She has served as a children’s minister and a church youth volunteer. An avid reader, she worked as a librarian at a large public high school. She writes humorous inspirational fiction for people with real lives and real problems. Janet and her husband have two grown children, one really smart dog, and a cat that allows them to share the space.
Website│Goodreads│BookBub│Facebook│Twitter│Instagram
Tour Schedule

One winner will receive a $10 Chick-fil-A gift card and signed copies of the first two books in the series, Magnolia Storms and Falling for Grace US only Ends November 6, 2019
ENTER HERE