The Names of Dead Girls by Eric Rickstad: Book Tour with Review 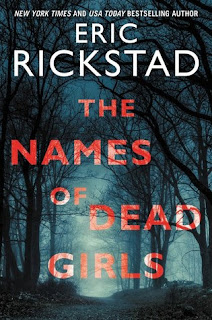 The Names of Dead Girls

William Morrow is thrilled to present the sequel to the New York Times and USA Today mega-bestseller The Silent Girls, which went on to sell more than 300,000 copies. The Names of Dead Girls is a dark, twisty thriller that once again features detectives Frank Rath and Sonja Test as they track a perverse killer through rural Vermont. By popular demand, the story picks up after the shocking cliffhanger on the last page of The Silent Girls and reveals what exactly happens between Rath and his nemesis, Ned Preacher. Although The Names of Dead Girls is a sequel, it reads perfectly as a standalone – new readers can dive in seamlessly.

After years spent retired as a private investigator, Frank Rath is lured back into his role as lead detective in a case that hits far too close to home. Sixteen years ago, depraved serial rapist and killer Ned Preacher brutally murdered Rath's sister and brother-in-law while their baby daughter, Rachel, slept upstairs. In the aftermath, Rath quit his job as a state police detective and abandoned his drinking and womanizing to adopt Rachel and devote his life to raising her alone.
Now, unthinkably, Preacher has been paroled early and is watching—and plotting cruelties for—Rachel, who has just learned the truth about her parents' murders after years of Rath trying to protect her from it. The danger intensifies when local girls begin to go missing, in crimes that echo the past. Is the fact that girls are showing up dead right when Preacher was released a coincidence? Or is he taunting Frank Rath, circling his prey until he comes closer and closer to the one he left behind—Rachel? Rath’s investigation takes him from the wilds of Vermont to the strip clubs of Montreal, but it seems that some evil force is always one step ahead of him.


Eric Rickstad is a master of the bone-chilling, nightmare-inducing thriller, and The Names of Dead Girls is one you won’t want to miss.

Rath drove the Scout as fast as he could without crashing into the cedars along the desolate stretch of road known as Moose Alley that wound through thirty miles of remote bog and boreal forest. The rain was not as violent here, the fog just starting to crawl out of the ditch.
Rath hoped the police were at Rachel’s and had prevented whatever cruelty Preacher had in store; but hope was as useful as an unloaded gun.
The Scout’s temperature gauge climbed perilously into the red. If the engine overheated, Rath would be stuck out here, miles from nowhere, cut off from contact. In this remote country, cell service was like the eastern mountain lion: its existence rumored, but never proven.
Finally, Rath reached the bridge that spanned the Lamoille River into the town of Johnson. His relief to be near Rachel crushed by fear of what he might find.
At the red light where Route 15 met Main Street, he waited, stuck behind a school bus full of kids likely coming from a sporting event.
He needed to get around the bus, run the light, but a Winnebago swayed through the intersection.
The light turned green.
Rath tromped on the gas pedal. The Scout lurched through the light. On the other side of the intersection, Rath jammed the brake pedal to avoid ramming into the back of the braking bus, the bus’s red lights flashing.
A woman on the sidewalk glared at Rath as she cupped the back of the head of a boy who jumped off the bus. She fixed the boy’s knit cap and flashed Rath a last scalding look as she hustled the boy into a liquor store.
The bus crept forward.
No vehicles approached from the opposing lane.
Rath passed the bus and ran the next two red lights.
The rain was a mist here, and the low afternoon sun broke briefly through western clouds, a silvery brilliance mirroring off the damp asphalt, nearly blinding Rath.
Rachel’s road lay just ahead.
Rath swerved onto it and sped up the steep hill.
A state police cruiser and a sheriff’s sedan were parked at hurried angles in front of Felix and Rachel’s place.
He feared what was inside that apartment. Feared what Preacher had done to Rachel.
Sixteen years ago, standing at the feet of his sister’s body, Rath had heard a whine, like that of a wet finger traced on the rim of a crystal glass, piercing his brain. He’d charged upstairs into the bedroom, to the crib. There she’d lain, tiny legs and arms pumping as if she’d been set afire, that shrill escape of air rising from the back of her throat.
Rachel.
In the moment Rath had picked Rachel up, he’d felt a permanent upheaval, like one plate of the earth’s lithosphere slipping beneath another; his selfish past life subducting beneath a selfless future life; a niece transformed into a daughter by acts of violent cruelty.
For months, Rath had kept Rachel’s crib beside his bed and lain sleepless as he’d listened to her every frayed breath at night. He’d panicked when she’d fallen quiet, shaken her lightly to make certain she was alive, been flooded with relief when she’d wriggled. He’d picked her up and cradled her, promised to keep her safe. Thinking, If we just get through this phase, I won’t ever have to worry like this again.
But peril pressed in at the edges of a girl’s life, and worry planted roots in Rath’s heart and bloomed wild and reckless. As Rachel had grown, Rath’s worry had grown, and he’d kept vigilant for the lone man who stood with his hands jammed in his trouser pockets behind the playground fence. In public, he’d gripped Rachel’s hand, his love ferocious and animal. If anyone ever harmed her.
Rath yanked the Scout over a bank of plowed snow onto a spit of dead lawn.
He jumped out, tucked his .22 revolver into the back waistband of his jeans, and ran for the stairs that led up the side of the old house to the attic apartment.
He hoped he wasn’t too late.
***
Excerpt from The Names of Dead Girls by Eric Rickstad.  Copyright © 2017 by Eric Rickstad. Reproduced with permission from Eric Rickstad. All rights reserved.

Eric Rickstad is the New York Times, USA Today, and international bestselling author of The Canaan Crime Series—Lie in Wait, The Silent Girls, and The Names of Dead Girls, psychological thrillers set in northern Vermont and heralded as intelligent, profound, dark, disturbing, and heartbreaking. His first novel Reap was a New York Times Noteworthy Novel. Rickstad lives in his home state of Vermont with his wife, daughter, and son.

I was sent a copy of The Names of Dead Girls in part of a blog tour.  My ratings and reviews will be my own personal opinions and are in no way influenced by publishers or authors who may have sent me books to review.

This book is the second in the series, but can be read as a standalone.  I did not read book one prior to jumping in.  The first few pages were confusing since I did not know the characters from the previous storyline, but the author quickly fills you in on their past.  It was easy to put together after that.

I definitely stepped out of my comfort zone for this one, but I am glad I did.  I started this one night, which was a big mistake.  I did not want to put it down and I also felt like someone was watching me all night.  Since I do not normally read scary thrillers, I decided I had to finish this during the day (I am a chicken).

This keeps you guessing and is an intense ride.  I wanted to put it down, but did not want to put it down.  If you love suspense, you are going to love this.  This had my heart racing during certain parts.  It did get a little intense at times, but I still really enjoyed it.

Overall, this was definitely not something I would normally read.  I am happy to have given it a chance as I really did enjoy it.

Stop by and visit the other great tour hosts for reviews, giveaways, and other terrific posts!!

This is a rafflecopter giveaway hosted by Partners in Crime Virtual Book Tours for Eric Rickstad and HarperCollins Publishers. There will be 3 winner of one (1) Amazon.com Gift Card. The giveaway begins on September 16 and runs through October 4, 2017.