Between You and Me by Lynn Turner: Book Blast 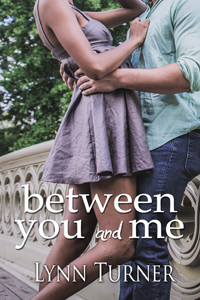 Between You and Me
By Lynn Turner
Genre: Contemporary Romance

Finn survived the crash that killed his parents when he was sixteen. Twenty years later, his smart devices are about to redefine what it means to be disabled.

Emanuela makes dreams come true for a living, but still longs to fulfill her own. Despite Finn's stunning secret, she thinks his idea might be worth the risk...and he’s determined to show her that he is, too. 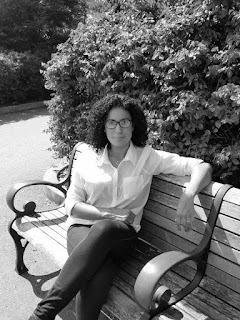 Lynn Turner inherited her writing gene from her mother, who created fantastic tales about witches, invisible worlds and talking animals, and read them to her children at night. Lynn isn’t as great with the voices as her mother, but Rome wasn’t built in a day.

She discovered romance far too young, when a mission to find a young adult fantasy title led her to historical romance. She spent hours skimming those sumptuous pages, drinking in the vivid descriptions of settings and clothes, feisty heroines and looming lords, and poetic language. (She may or may not have enjoyed the PG-13 bits too, tucking a new title beneath her pillow at night).

She enjoys character-driven narratives most, and anything that transports her someplace else. Passionate about food and travel, she features healthy doses of both in the stories she crafts. Above all, she is dedicated to writing inclusive stories that explore what it means to be imperfectly human.

When she isn’t writing, she’s traveling, dreaming of traveling, or watching old Samantha Brown travelogue videos and wishing she had her job. She and her husband share their home in California with their two extraordinary children, and hope to add a floppy kitty to the family very soon.

The author is giving one lucky reader chocolates and a custom-made coffee mug with a poem on it, PLUS an ebook!

All the emotions from that night washed over him and the onslaught churned his stomach. “It was the same for me. But at the same time, I wanted to get far the hell away from you.” He watched her face for any sign of hurt, but to his relief, she just nodded.

“I know.” She frowned. “It was so strange. Almost made me sick.”

He drew in a sharp breath, noticing her stiffen in response.

“That’s exactly how it was for me. It’s how I’m feeling right now.”

She nodded again. “We were both a little off. But your pitch was one of the more memorable ones I’ve had.”

“Don’t remind me. I don’t think I’ve ever botched it like that before.”

“Excuse me?” She smacked his chest. “Maybe I should rescind that offer.”

He chuckled. He knew she was wide open, and he wanted her to trust him. It was his turn to be exposed. He tapped his leg. “This is the best one I’ve had so far, except I can’t deep sea dive with it.”

She reached for his hand. “How many do you have?”

“Just one. But I’m waiting for the military to finish developing those bionic legs so I can lift cars with my foot.”

Her slim fingers traced his bigger ones. “You don’t have to do that, you know. Self-deprecate. You’ve already seen me naked.”

His eyes raked over her, his pulse jumping at her words. “You have no idea how much I’d like to see that again,” he said, sensing her shiver. “But first I want you to see me too. The real me.” He looked down at their hands. “Only if you’re comfortable.”

“You haven’t asked me to spank you with it, so this is already an improvement from my last date.”

He laughed at her horrified expression. “’Fraid so.” He gently removed her legs from his lap and stood in front of her. “And that was an improvement from the date before that.”

“Well, some kinky stuff is fun.”

“Ugh.” She narrowed her eyes. “Just drop your pants already!”

He grinned and turned away to do just that, bending to tug them off before coming back to sit beside her. Without further ceremony, he pushed on the front of the leg and a tiny motor whirred. “It’s vacuum sealed,” he said. “The button is hidden beneath this sleeve.”

He pulled down the flesh-colored skin covering his knee and the prosthetic leg. Then, he removed the prosthesis and propped it against the end table, glancing at Emanuela.

“How does it feel to take it off? Is it like taking your shoes off at the end of the day?”

“Wow.” He smiled wide. “That’s not half bad… It’s more like taking off a snug pair of jeans. Just by the way it feels.”

She nodded and he removed the sock, then peeled off the liner to leave his stump bare.

He watched her a moment, letting her take it in. Her eyes widened. Much of his leg was intact, halfway to his shin. It was smooth and conical, with a long pink scar at the tip of the stump.

“Some assembly required,” he said.

She made a sound that was half-gasp, half-laugh. “I’m sorry.”

“Don’t be. I was shocked the first time I saw it too.”

Her lips parted and closed again, darkness clouding her eyes. Finn could read everything in her face, and he silently agreed with the conflict he saw there. Part of him wanted to share the details about what happened, but another part of him wanted to preserve a moment that was new and exciting and full of promise. Another time. If she gives me a chance.
Posted by Simply Kelina at 6:00 AM